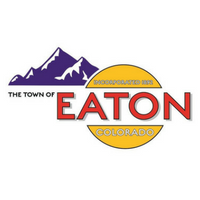 In 1882, Colorado Senator Benjamin Eaton (later Governor) mapped the town he called Eatonton along the Union Pacific rail line, naming the streets for trees to inspire residents to plant them. Eatonton’s name was shortened to Eaton in 1883 because “Eaton” was the name of their train station, built from bricks made in town. At about that same time, the town built a fence around farms from the Larimer County line to the fence encircling Greeley to deter free range cattle. It was a disappointment as a barrier and was soon replaced by the farmers’ sturdier fences. The Big Store was Eaton’s department store of the late 1800s, able to sell everything from groceries to hardware to farm implements. Run by Aaron Eaton (the governor’s eldest son) and his uncle, James Hill, it also served as community center, church, music hall, and auditorium. By 1890, there were several Eaton area coal mines, lumber and brickyards, and a newspaper (published in the Big Store). In 1892, Eaton was incorporated, and ten years later the first sugar factory in Weld County was built in town.