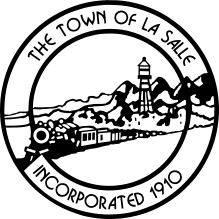 The Denver Pacific Railroad (DPRR) from Cheyenne reached the present LaSalle townsite on May 11, 1870. By 1875, LaSalle had a depot, section house, and coal chutes, but it wasn’t until 1881 that a town began to develop as the Union Pacific bought out the DPRR and extended a line 151 miles southwestward from Julesburg, meeting the Cheyenne to Denver line at La Salle. The most likely theory about the naming of LaSalle is that it was named after the LaSalle railroad station in Chicago, named for the French explorer, Robert Cavalier Sieur de la Salle (1643-1687).

In 1886, the LaSalle Post Office was established, and the town was platted in 1891. In 1909, the railroad built a four-stall roundhouse to turn train engines, a railcar repair shop, and a 60,000-gallon-water tank and the town grew to provide major passenger and freight service. LaSalle was incorporated in 1910.

LaSalle’s bridge over the South Platte River was built in 1936. The final portion of the first concrete highway in Colorado was opened between Greeley and LaSalle in September 1954. UPRR received a protest in 1955 from the coalition of Greeley, Eaton, and LaSalle about a plan to discontinue local train passenger services between Cheyenne and Denver, but eventually the service was closed.