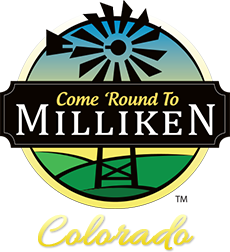 “A Community Working Together”

The Denver, Laramie & Northwestern Railroad (DLNWRR) established Milliken Station, named for John D. Milliken, on its line between Denver and Laramie outside of the former town of Hillsboro in 1909. Transportation of agricultural products from Milliken to various markets were among DLNWRR’s goals. The town’s 1909 plat included the final Hillsboro site, and the last of Hillsboro’s businesses were moved into Milliken. The town grew rapidly and supported over a dozen businesses, including a 16-room hotel, sugar beet dump, and a newspaper, The Milliken Mail. However, the DLNWRR line terminated at Greeley, far short of its goal. Construction in Greeley was taken over by the Greeley Terminal Railway, and the rest was purchased by Great Western Railway or abandoned and removed. A disastrous fire, the first of several, burned downtown Milliken in 1911, yet the growth of the sugar beet industry and its transport on the former DLNWRR rails kept Milliken a hub of sugar-related commerce.