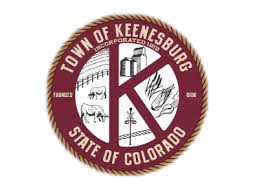 Keene Station, named for local homesteader Les Keene, was built along the Burlington-Missouri River Railroad line in 1882. Station business was primarily shipping from yearly cattle drives. In 1906, the Chicago, Burlington, and Quincy Railroad built a depot at Keene and requested a post office. In 1907, the post office was established, but to keep it from being confused with Keene, Nebraska, its name was changed to Keenesburg. Most of Keenesburg’s residents raised livestock or were dry land farmers. Keenesburg was incorporated in 1919 and grew to support a newspaper, the Keene Valley Sun, in 1924.

By the end of the 1920s, the Henrylyn Irrigation System was completed. In the early 1930s, irrigation wells were dug, allowing Keenesburg farmers to produce more from their crops.